The response to part 1 was very positive so as promised, here’s part 2 of ordering food in real Japanese. I imagine the first thing most people come up with when thinking about Japanese food is “sushi” but for me, I would definitely say it’s “ramen”. Ramen was definitely a big part of what got me interested in the Japanese culture very early on. Tampopo is still one of my favorite movies of all time. If you haven’t watched it yet, you’re seriously missing out. 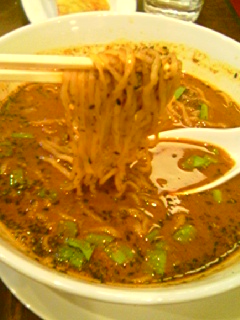 Ahh, the rich and complicated world of ramen. There’s so many things to cover but let’s just start with the basics. First of all, ramen is everywhere in Japan so finding it is like trying to find a Starbucks, not very difficult. However, Ikebukuro is perhaps one of the neighborhoods more famous for it’s ramen. There’s one I particularly liked whose name I can’t recall where you can crush your own fresh garlic (I love garlic).

Before we get into all the crazy ingredients that can go into ramen, you should first become familiar with the major types of ramen. These types will be generally enough to get your ramen fix in most generic ramen shops. Of course, many restaurants try to come up with clever names but it’s usually just marketing for these basic types of ramen. 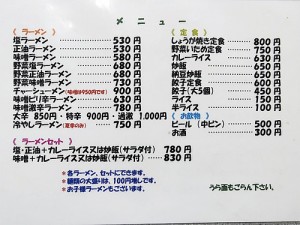 A typical ramen menu (among other things)

This is the main list but there are other types of ramen out there like 「カレーラーメン」, for example.

In addition to the major types of ramen, sometimes the cook will ask you how hard you want your noodles. Personally, I prefer al dente as do many of the more hard-core ramen enthusiasts. You can even ask for soft but who likes soggy noodles? Another great trick for a really filling meal, if the option is available, is to save the soup and order an extra ball of noodles. This is called 「替え玉」（かえだま）. It’s like an extra bowl of ramen often for as little as several hundred yen!

Oh boy, this is going to be a doozy. A small number of ramen shops give you a list of ingredients, allowing you to choose each and every ingredient in your ramen (often charging you extra for each one). My wife usually picks miso, butter, and corn…. Ugh…

In Japanese, this is called 「具」（ぐ）, which basically describes the solid stuff in any kind of soup or stew. There are a lot of ingredients so I’m only going to go over the major ones except for those we already look at in the major ramen types.

Also check out this the wikipedia ramen entry. There’s a lot more information about ramen as well, such as regional specialties. It’s all in Japanese but there’s also plenty of yummy pictures to feast your eyes on. Lovers of garlic and thick とんこつ soup like me will love 熊本ラーメン, though as I painfully learned first-hand, you probably don’t want to actually eat all the garlic chips.

So there you have it. Welcome to the wonderful world of ramen! This post just barely scratching the surface so you haven’t seen nothing yet!