Update: Ok, these guys are now spamming my youtube channel with obvious and obnoxious spam. DO NOT BUY FROM THESE A**HOLES! Hopefully, this post ranks #1 for any search related to Rocket Japanese so that people are aware of their shady business practices.

I was asked to review Rocket Japanese several months ago and totally forgot about it. So before I forget about it some more, here it is.

My first impression was wow, there’s a lot of marketing and no clear picture of what products are available at what price. You have to scroll through various links and pages of marketing to even see what’s for sale. A simple product matrix would be nice.

Signing up for a free trial shows a checkbox: “YES! I want to try Rocket Japanese for free!”. Ok, why would I want to uncheck that? Anyway, once you’re in, there are 5 major sections, parts of which are inaccessible in a trial. 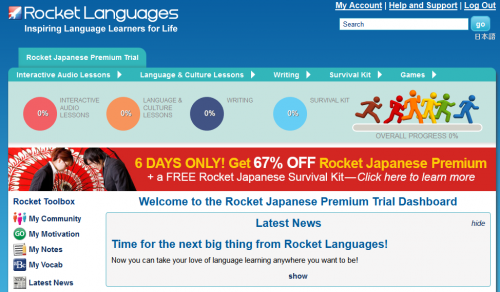 I could only force myself to listen to the first few lessons. Overall, it’s a nice introduction to some useful Japanese phrases but Kenny’s pronunciation is so bad, it’s really a mystery why anyone would want to learn Japanese from him. Unfortunately, he drives the lessons instead of the native speaker. JapanesePod101 had the same problem in the beginning but they now have much better hosts on their staff. (I should do a review of JapanesePod101, they’ve come a long way.)

The grammar explanations are useless and creating your own sentences from these lessons is impossible. For example, they mention things like the stem or te-form but offer no explanation on how one would go about conjugating a verb to these forms. The explanations also sound like they came out of a 20 year-old Japanese textbook including instructions on how to bow and the overuse of 「あなた」. Let’s review the definition of 「あなた」.

1. Address someone of equal or lower social status politely and/or with familiarity.
2. Wife addressing husband with light respect and/or familiarity.

*In modern Japanese, the level of politeness is low so it’s not preferred for student or young people to address a teacher or elder （with あなた）.

Basically, if you want to get some exposure to Japanese and get to repeat some phrases, ignore everything Kenny says and you might get some value out of it.

Once again, there’s no real explanation of how the example sentences are constructed so you won’t be able to make your own sentences but you can hear the pronunciation of the sentences that are there. Some of the culture notes are informative but romaji is used in quite a few places including most of the quizzes.

There are tons of websites that teach Hiragana and Katakana because it’s an easy thing to learn and teach. Rocket Japanese’s version has nice videos for the stroke order though it only covers up to 「な、に、ぬ、ね、の」 in the trial. I also don’t see any mention of long vowel sounds in the menu (though I can’t verify). It’s a very important and often overlooked part of Japanese pronunciation. Considering how many free resources there are for learning kana such as Memrise‘s innovative approach, it’s surprising that you get so little with the trial.

The games are really cool! But it uses romaji. Darn. I haven’t progressed far enough to know if they switch to kana/kanji at a higher level.

On the left nav panel, there’s a section called “My community” which is basically an online forum and “My motivation”, which has some good learning tips worth perusing.

It’s not clear which of the five sections on the top I should start with and when to go from one to the next. Replace Kenny, teach the full kana in the trial, kill the romaji, and make the navigation and progression clearer and you might have a decent package for practicing and learning phrases. However, if you want to learn grammar and how to construct complex sentences from scratch, you won’t get it with their teaching methodology, which basically consists of translating bits and pieces of pre-constructed sentences.

To sum up: Rocket Japanese is a confusing mishmash of audio lessons, culture notes, writing lessons, and unhelpful quizzes with no clear ordering or curriculum covered up by a mountain of marketing. You can find some useful learning tips and nuggets of good audio phrases buried in a confusing interface, romaji, and Kenny’s horrible pronunciation.

Verdict: Try out the trial if you’re really bored but keep your money.